Thunder Screech is a new Play’n GO slot game dedicated to one of the legendary North American creatures – the thunderbird. The slot is not named after the legendary aircraft – this ... Read Full Review 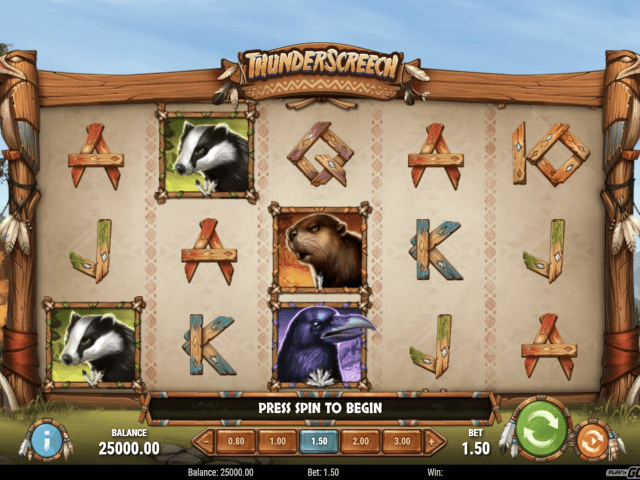 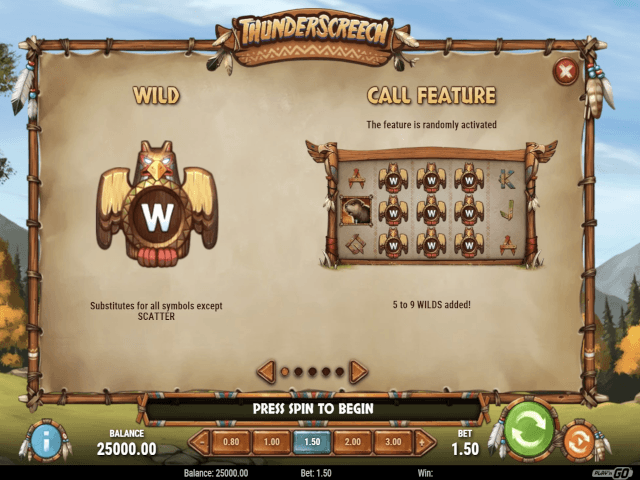 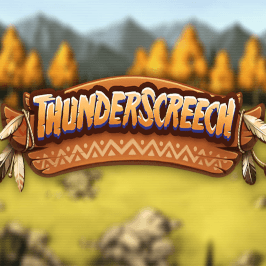 Thunder Screech is a new Play’n GO slot game dedicated to one of the legendary North American creatures – the thunderbird. The slot is not named after the legendary aircraft – this one has a more mythological feel to it. We don’t see Native American mythology in the slot industry as much as we’d like to, but Play’n GO has really nailed it down with this slot.

The Thunder Screech online slot is an homage to one of North America’s greatest legends. It puts the thunderbird front and center in a fantastic package that not only looks great – it pays great too. The Native American slot centers around features such as Strike Respins and progressive multipliers wilds that can deliver the big bucks.

Play Thunder Screech for real money in your favourite online casino and we’re sure you’ll be impressed by what Play’n GO has done.

The Thunder Screech slot is a pretty simple game to play. It has 5 reels in 3 rows set against the great North American outdoors. The reels have a wooden frame that fits the theme, with all kinds of creatures on the reels. The thunderbird is featured front and center, with beavers, rabbits, and other animals gracing the reels too.

Play'n GO slots have always been impeccably designed and this one is no exception. The graphics are certainly impressive and so are the sound effects. A touch of Native American symbolism has been added with dreamcatchers that can pay solid sums of cash.

The layout and design make things simple for players. It’s a slot that’s very easy to play regardless of your device.

As a mobile-first developer, Play’n GO designs all its slots for mobile devices. The Thunder Screech slot is available without download on all Android and iOS smartphones and tablets.

Playing the game obviously requires you to set your bet first. You can choose between 0.10 and 100 per spin – this is more than suitable for new players and high rollers too. The slot comes with 10 fixed paylines, and although that doesn’t sound like much, special features keep it alive.

The Thunderbird totem is the game’s wild. It lands on the middle reels only and works just like a regular wild. There’s a special wild feature called Call that adds 5-9 wilds on the reels. There’s a familiar feature in Strike Respins that can upgrade all wilds to Thunder Wilds. In this case, they will turn to sticky symbols for a few respins with a progressive multiplier.

You start the respins at x1, with the count going up by 1 for each win. Whenever a Thunder Wild reaches an x3 multiplier, it is removed from the reels. If you have more than 1 Thunder Wild as part of a winning combination, their values are added together. The Strike Respins feature is one of the best in the game and ends when there are no more Thunder Wilds on the reels.

Land at least 3 Dream Catcher scatters on the reels to get 5 free spins. In the bonus round, all Thunder Wilds you land are turned to Thunder Multiplier Wilds. You are guaranteed at least 1 Thunder Wild per free spin. Whenever it lands, it will trigger the Strike Respins feature once again, but this time, it arrives when the bonus round ends.

Unfortunately, the fun free spins round can’t be retriggered, so you only get a limited amount of extra spins.

Play’n GO’s Thunder Screech online slot has an RTP of a solid 96.2%. It’s a medium-volatile slot that pays various rewards. The most rewarding round is the bonus round, where progressive multipliers during Strike Respins can shell out prizes up to 5,000x your bet.

Play’n GO has quite an interesting slot in Thunder Screech. We rarely see Native America-themed slots anymore, so this one is a breath of fresh air. The slot may not have the most exciting base game, but familiar features such as progressive multipliers and Strike Respins make it truly worth your while.

If you’re lucky, the free spins round can direct you to 5,000x wins. Play the Thunder Screech slot for real money in our top online casinos and walk the way of thundering wins.