Gems are very valuable in the slot industry, just like in real life. They’ve been the subject of many slot releases, including hits such as Starburst. Pragmatic Play has joined the gem ... Read Full Review 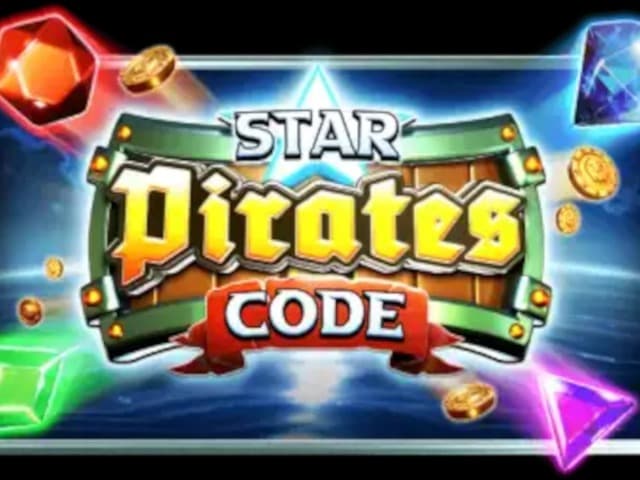 Gems are very valuable in the slot industry, just like in real life. They’ve been the subject of many slot releases, including hits such as Starburst. Pragmatic Play has joined the gem party recently with the release of Star Pirates Code, a new video slot that tries to blend old-school gameplay with modern features.

And it does so very successfully. The Star Pirates Code slot is a highly volatile game with 10 paylines and vintage gameplay. That’s the only thing vintage about it. The slot has numerous great features taken from Pragmatic’s modern slots. Line up chests, golden coins, and the shiniest gems on the reels, and you’ll be in a great position to win fantastic sums of cash.

Star Pirates Code is available in any Pragmatic Play casino. Play it for free or real money, and you win yourself a chest of rare gems that shine brighter than the sun.

Star Pirates Code’s design isn’t unorthodox in any way. It’s a typical 5x3 slot with the paylines indicated at the end of the reels. It gives it a classic look and feel, even if the graphics are fit for 2021. All of the controls are located right beneath the reels, so you should have no trouble spinning them.

The paytable shows that the chest pays 15x for five of a kind, which is the most out of all symbols. Pragmatic Play has done a pretty nice job with the graphics and audio, so you can expect a modern slot experience.

You can play the slot on any device and expect the same layout across them all.

The Star Pirates Code slot was developed on HTML5 technology. Thanks to it, you can give it a spin on both Android and iOS devices at our recommended mobile casinos. With a familiar layout, spinning the slot shouldn’t be a problem at all.

Before you start spinning the reels and matching gems, you’ll have to place a bet between €0.10 and €250 per spin. Hit the Spin button or use the Autoplay feature if you don’t like clicking the button on each spin.

Once the reels start rolling, it’s all about lining up high-paying symbols in combinations with Wilds for bigger payouts. The Wild can step in for any symbol except for the Compass Wild, appearing on reels 2, 3, and 4 only.

The second special Compass Wild can substitute for all symbols and trigger the Respin feature. When activated, the Compass will show a random direction and add Wild symbols there. That part of the screen will be filled with Wilds, including the position of the Compass Wild. At that point, the Wilds will be locked, and a Respin will follow. If you’re lucky for more Compass Wilds to land during the Respin, another one follows.

Every time Wilds land in already locked Wild positions, a Multiplier is applied. With each new Wild in that position, the Multiplier rises by 1.

Check out our list of real money slots to find the Star Pirates Code slot!

The RTP of the Star Pirates code slot is set to a pretty high 96.70%. The fact that it’s a highly volatile slot game means that you can expect some pretty solid wins. In both the base game and respins, the maximum possible line win is 2,500x your stake.

Pragmatic Play has done a pretty solid job on Star Pirates Code, blending old-school gameplay with Respins and Multipliers. It’s a slot that’s easy and fun to play, and best of all, it can be quite rewarding. The Compass Wild adds flair to an already solid game, and the classic look and feel make Star Pirates Code a great addition to Pragmatic Play’s portfolio.

If you love gem-laden slot games with solid winning potential, Star Pirates Code by Pragmatic Play is a great choice to play at our recommended online slot sites.

The Star Pirates Code slot was released by Pragmatic Play. It’s one of the top studios on the market, releasing a slew of big hits such as Big Bass Bonanza.

The RTP of the Star Pirates Code online slot is pretty high at 96.70%. It’s also a highly volatile slot, so keep an eye on your bets as it could eat through them pretty fast.

Yes, it is. Pragmatic Play puts it almost on an extremely volatile scale, so be mindful of your bets. If you’re not careful and manage your bankroll, you’ll be in trouble before you know it.

Does the Star Pirates Code slot have a jackpot?

No, it doesn’t. Star Pirates Code is a classic jackpot with a modern feature that doesn’t include a jackpot. Still, the maximum winning potential is pretty solid and almost as big as a fixed jackpot reward.

Is there a Free Spins Round in the Star Pirates Code slot?

Unfortunately, the Star Pirates Code online slot doesn’t have a Free Spins Bonus Round. However, it has a Respin feature that can go on infinitely as long as Wilds land on the specified positions. It makes up for the lack of a Free Spins Round and is a pretty solid Bonus feature that can be triggered pretty frequently.

Can I play the Star Pirates Code online slot for free?

Yes, you can. The Star Pirates Code slot demo is available in all Pragmatic Play casinos.

Is the Star Pirates Code slot available on mobile devices?

The Star Pirates Code slot is developed using HTML5 tech, so it’s available on a range of mobile devices. You can play it on the go on your Android or iOS smartphones or tablets straight from your browser.

Should I download any software to spin the Star Pirates Code slot on my phone?

No, you don’t need to download any third-party apps or software to play Star Pirates Code on your mobile phone. Just head to your favourite casino and spin it from your browser.

Which slots are similar to Star Pirates Code?

Gem-laden slot games are not a new thing in the slot industry. The biggest of them is surely Starburst, NetEnt’s biggest hit. If you’re heading for the pirates' angle, we can recommend Pirates Plenty Megaways by Red Tiger Gaming.

When was the Star Pirates Code slot released?

The Star Pirates Code online slot was released on October 25, 2021.