Hugo Goal is a 3x3 Play'n GO slot game from mid-2018 that combines football with Hugo the troll, a hugely popular TV character that originated in Denmark in 1990. The game offers ... Read Full Review 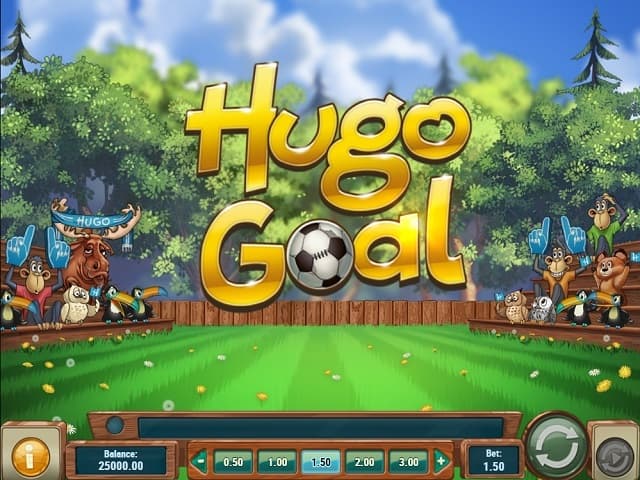 Hugo Goal is a 3x3 Play'n GO slot game from mid-2018 that combines football with Hugo the troll, a hugely popular TV character that originated in Denmark in 1990. The game offers two fun re-spin features and a penalty shootout game that can increase your full board win up to x10, and you can win up to 800x your bet in Hugo Goal!

The game has 5 fixed paylines on a 3x3 board, and it's simple to set up, just like all modern Play'n GO titles that are optimized for mobile use. Your bet per spin can be from €0.05 to €100, which is actually from €0.01 to whopping €20 per payline. After you've set up your bet per spin the game is simple to play as you just click or tap Spin. If you want to initiate Autoplay or trigger Fast Play or Left-handed Play, all that is done in Settings that are available when you click the ladder icon. That's also where you change your bet, so changing it often is not very practical in this game.

The paytable is split into two groups, Items and Characters. Items are the low-paying group and the five of them pay from 0.60x to 1.20x your bet for three-of-a-kind, which is the only winning combination possible in this game since it has three reels. The three Characters pay significantly better prizes of 3x, 4x and 5x your bet respectively, and Hugo is the Wild that pays 16x your bet if you land three of them on a winning payline. Characters and Wilds are stacked symbols that are three symbols high, so with them you always have a chance of landing a full board win which would grant 5 payline wins. Items can also appear stacked, but not always.

Action Replay is a feature that will give you unlimited re-spins of one reel, if the two other reels each have a full stack of the same Character symbol. The re-spins will go on until you win, and this is a great feature that will help you get a big win. Same thing happens when you have two full reels of the same Item symbol, but in that case the feature is called Free Kick.

Finally, the most important feature in the game, that will get any player excited, is triggered whenever you land a full board win. You'll enter the Penalty Shootout, with you/Hugo as the goalkeeper, and will get to save 5 penalty kicks. Each one you save will increase the win multiplier for your full board win – x2, x3, x4, x5 and finally x10 if you save all five. This means you can win up to 800x your bet on a single spin in this slot game! In case of a maximum bet, that would be €16.000. This is one of those slots that actually should be played for real money, as the prospect of getting that win multiplier is worth the risk. Also, the Penalty Shootout game will be infinitely more fun if you're winning at a real money casino!

Hugo Goal has a theoretical return to player (RTP) of 96.00%, which is decent, but the main thing about this slot is that it's so much fun to play and you don't even notice if you're winning or not. Just like every other three-reel game, this one too has variance that's a bit high, and this game can drag your balance into negative, but the fun part is that the full board wins are actively encouraged, and when you get one, you're playing a very fun feature that can bring you a win multiplier of up to x10. This is definitely a recommended slot game to play, even if you don't usually play 3x3 slots. Pick a Play'n GO casino from our list of top casinos, and find Hugo Goal there and play it for real money.