Remember how the world of hip-hop was shook by the East Coast vs West Coast rap battle in the 90s? While most of it has gone calm since then, plenty of rappers ... Read Full Review 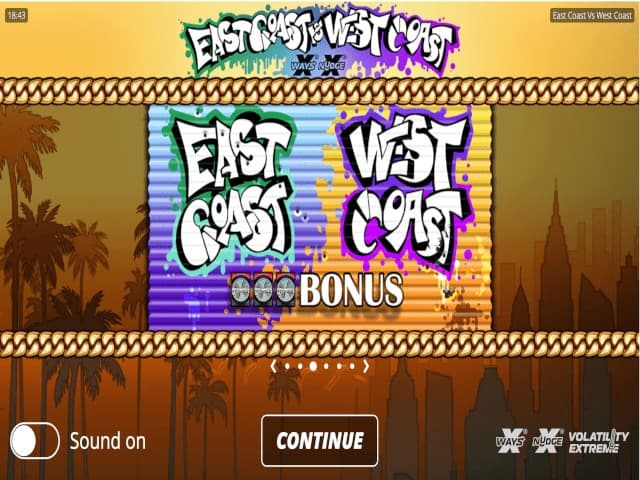 The slot draws inspiration from the biggest rap battles of the 90s with vicious dogs, benjamins, and a lot of gold and hustle on the reels. A bumbling rap soundtrack completes the full experience which is boosted by graffiti beside the reels. The retro vibes make the slot truly exciting from a visual perspective, looking like a rap video from the 90s by one of the greats.

Play the East Coast vs West Coast slot for real money at top online casinos and you can count on a stack of dolla’ dolla’ bills!

NoLimit City has been known to develop truly great slots from a visual perspective. The East Coast vs West Coast slot is yet another score, looking like a rap video from the budding 90s. It was a great time for rap that established many elements that define the genre, including baggy clothes, expensive jewellery, stacks of cash, and graffiti.

On the reels, you’ll find dogs with gold collars, dolla’ bills, a boombox, and graffiti-styled card royals. The visual style is accompanied by booming rap tunes that give the slot a great feel. Real OGs will love the visuals and we have to agree – NoLimit City has really outdone itself this time.

The 100-dollar bill pays the most which is to be expected, with a 7.50x payout for 5 on a line - and enticing prospect for real money slot fans. That might seem a bit low, but that’s before you get all the enhancers into play including xWays, xNudge wilds, multipliers, and linked reels.

NoLimit City is a mobile-first developer, so you can expect the slot to work great on mobile devices. The East Coast vs West Coast online slot is available on Android and iOS smartphones without the need to download.

The East Coast vs West Coast slot is budding with features – there are so many that we don’t know where to start! Let’s make things easy for new players – before you do anything, you have to set your bet. You can choose between 0.20 and 100 per spin. Choose what suits you best and start the rap battle by hitting the Spin button.

You can win in 243 different ways with a slew of special features. In the base game, OGs can benefit from a full suite of enhancers. The first two are the xWays symbols that can transform into others (except Wild and Scatter), while the second feature are the xNudge Wilds that can raise the wild multiplier by 1.

If you link several multipliers together, they will bring the number of ways to win sky-high. Additionally, the slot makes great use of Linked Reels and Infectious xWays that can make identical symbols expand on the reels to the same size.

The final feature is one all rappers will hope to earn – Drive By respins. It is triggered by 2 scatters on the same spin, giving you a single respin with one active enhancer.

There are two types of free spins available in the East Coast vs West Coast slot – one for East Coast fans and one for West Coast rappers. If you land 3 or 4 East Coast wilds, you get 8-10 East Coast free spins. These come with Infectious xWays symbols guaranteed to land on each spin.

The bar above the reels can trigger other enhancers – land all 5 and you’ll get to the Coast to Coast feature which is the slot’s crown jewel.

A second feature called West Coast spins is triggered in the same way as the first, but with West coast bonus symbols. This time, one of the five Enhancers is unlocked randomly on any spin. The other Enhancers are locked and can be unlocked by more bonus symbols. Once again, unlocking all 5 takes you to the Coast to Coast feature.

This feature can only be unlocked via the free spins rounds or by landing 5 bonus symbols on a single spin. You’ll get 5 extra spins with 2 Enhancers unlocked on each spin. It’s the slot’s wildest feature that unlocks its full winning potential.

The East Coast vs West Coast slot has a very average RTP of 96.04%. It’s truly is not inspiring at first glance, but keep the slot’s Enhancers in mind – they boost its winning potential significantly. Keep and eye on your bets too as this is a highly volatile slot.

If you unlock all the Enhancers in the bonus features, you can look forward to a max payout of 30,618x your bet.

East Coast vs West Coast is another on-point slot by NoLimit City. It looks great and comes with a slew of Enhancers that will help you blast your opponents back where they came from. It’s time to pick a side and crew and go hunting for fake rappers. Make your coast proud!

Fancy a completely different feel for your next slot experience? Look no further, the Jammin' Jars Slot has you covered!