Immerse yourself in a magical adventure playing Red Tiger Gaming’s dragon-themed slot, Dragons Clusterbuster. As its name might suggest, the title uses a Cluster Pays mechanic, but it spices things up a ... Read Full Review 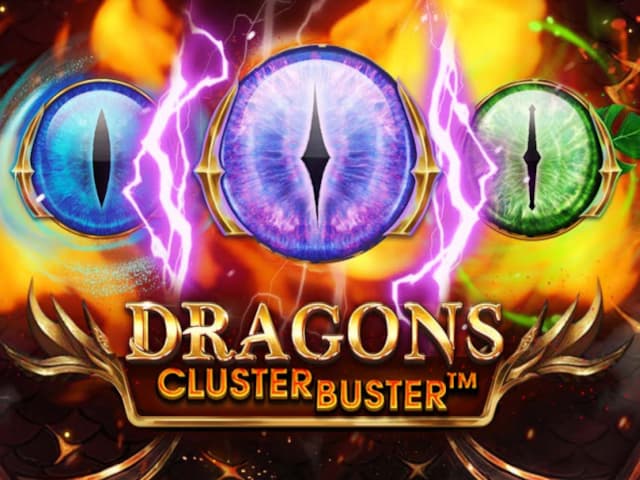 Immerse yourself in a magical adventure playing Red Tiger Gaming’s dragon-themed slot, Dragons Clusterbuster. As its name might suggest, the title uses a Cluster Pays mechanic, but it spices things up a little bit. The ‘Buster’ element of the game comes from a feature that involves landing winning clusters to unlock bonus features. The studio has dabbled with similar ideas in the past, and now it has seemingly given the mechanic a name. As we’re in the habit of breaking down the slot’s title word for word – the dragon element offers the game its theme, with the game whisking us away to some sort of fantasy kingdom overruled by a dragon. Now we’re done with the name, let’s break down every other element of the Dragons Clusterbuster slot and see what it has in store.

The Dragons Clusterbuster slot game has a really nice design. Red Tiger always delivers high-end graphics, and this is no exception. The setting of the game itself is a little ambiguous. We are not set inside a castle or a cave, which would be the typical setting for a dragon-themed slot. Instead, the scales of the dragon make up the background, while two metal curved poles come around either side of the reels. It looks more similar to the stand that the Eye of Sauron appears on in Lord of the Rings.

Speaking of which, several glowing eyes make up some of the slot bonuses in the game, and they look great. They help add to the fantastical feel and setting of the game and do a good job of helping immerse you in this world.

The base game in the Dragons Clusterbuster slot game will instantly grab your attention. The slot takes place on an enhanced 9x9 grid, but there is a 3x3 grid that is blocked off in the middle of the game. This grid is used to hide one of the game’s features, and players need to bust their way through it in order to unlock the feature.

The slot uses a Cluster Pays mechanic, which means that any winning combinations are formed by symbols landing in clusters as opposed to on traditional paylines. Whenever a win is secured, a reaction takes place, with more symbols dropping down onto the grid to continue the winning run. This stops whenever there are no clusters left.

Players can set all of this in motion for a stake of between €0.10 and €20. This is a fairly small betting range that is going to please those who like playing with more restricted budgets.

Red Tiger Gaming has developed the game to ensure that it looks just as great on different devices and screen sizes. We found that the Cluster Pays mechanic and unique set-up of the game lent itself perfectly to mobile play and brought back memories of playing mobile applications and games.

The true scope of the Cluster Buster mechanic becomes clear with the slot’s bonus features. In order to unlock the aforementioned block in the middle of the grid, players need to form winning clusters around it. This will all need to be done in one winning cascade, with the slot resetting with every new spin.

When players manage to break through the block, they will unlock a feature. These features are sequential, with each one remaining unlocked once it has been broken free. There are three-reel modifiers that can be unlocked through this in the following order:

Once all three have been unlocked, the egg in the middle of the grid turns into a free spins option. From that point in – any of three mechanics can be activated at random, and every time you break the egg, you will trigger a Free Spins Round. During this round, the full 9x9 grid is active, which is the only time that is the case within the game.

The Dragons Clusterbuster slot offers some good numbers. The maximum win that can be secured here is 7,931x the stake, though, the slot doesn’t specify exactly how this can be won. A safe bet would be through the multipliers added during the Purple Hatchling mechanic. The RTP of the slot is 95.78%, which puts it ever so slightly below the average. The slot is considered highly volatile.

Dragons Clusterbuster is an innovative title from the team at Red Tiger Gaming. The idea of unlocking bonus features is interesting, and your enjoyment of the game will come down to your thoughts on this and your style of play. Those who enjoy long sessions are likely to love this because it offers a reason to keep spinning and gives the game a sense of progression. Those looking to jump in and out of a slot game may not find this title too rewarding. That said, Red Tiger deserves plenty of recognition for what is a really well-designed and fun title that feels different from other slots available at many premium online slot sites. It will be interesting to see if the Cluster Buster mechanic is something it returns to.

Who made the Dragons Clusterbuster online slot game?

Dragons Clusterbuster was developed by the team at Red Tiger Gaming. Red Tiger is one of the most established developers in the industry and it has a big selection of top online slots under its belt, including Piggy Riches Megaways and Gonzo’s Quest Megaways.

What is Cluster Buster?

Cluster Buster is a new mechanic that has been developed by Red Tiger Gaming. It involves players landing winning combinations to unlock a blocked part of the online slot game grid. Doing so will then release bonus features and modifiers.

How do I trigger Free Spins in Dragons Clusterbuster?

The Free Spins Round in the Dragons Clusterbuster slot is triggered when players have successfully broken through all of the previous bonus features. At this point, the egg in the middle of the grid is replaced with the Free Spins icon.

How many paylines are there in Dragons Clusterbuster?

There are no paylines in the slot game. The Dragons Cluster slot game uses a Cluster Pays mechanic. Instead of traditional paylines, the game pays out when players land clusters of five symbols or more on the grid in a single spin.

Can I play the Dragons Clusterbuster slot game for free?

Yes. However, this will depend on your location. In most places, players can play Dragons Clusterbuster for free at the best online slot sites.

How much can I bet in the Dragons Clusterbuster slot game?

The Dragons Clusterbuster slot game has a betting range of between €0.10 and €20, making this good for players on lower budgets.

What is the maximum amount I can win in the Dragons Clusterbuster slot?

The Dragons Clusterbuster slot has a maximum win of 7,931x the overall stake. It is not made clear in the game exactly how players can achieve this win.

What is the RTP of the Dragons Clusterbuster?

The Dragons Clusterbuster slot has an RTP of 95.78%, putting it just below the industry average of 96%.

Can I play Dragons Clusterbuster on my mobile?

Absolutely! Red Tiger Gaming has developed the Dragons Clusterbuster slot game so that it can work on a range of different mobile devices. This includes those on both Android and iOS operating systems.

How volatile is the Dragons Clusterbuster slot game?

The Dragons Clusterbuster online slot game is considered highly volatile. This means players shouldn’t expect to land big wins very often. One reason for this is likely because players will have to play the game for quite some time before all of the bonus features are active.