Even if you know nothing about H.P. Lovecraft-inspired universe, Cthulhu Mythos, and the same-named fictional creature, Cthulhu, a caricature of a human, in the shape of a dragon and with the head ... Read Full Review 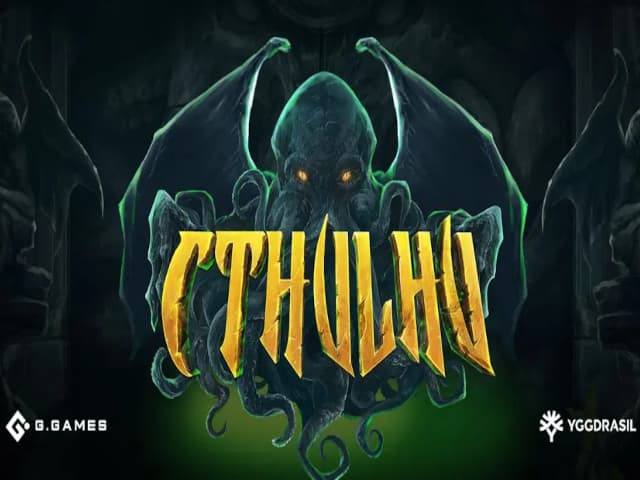 Even if you know nothing about H.P. Lovecraft-inspired universe, Cthulhu Mythos, and the same-named fictional creature, Cthulhu, a caricature of a human, in the shape of a dragon and with the head of an octopus, you will learn all about it in Yggdrasil’s latest slot. Cthulhu slot was designed by Gluck Games as part of Yggdrasil’s YG Masters program and is already available across top online casinos powered by the leading developer.

The slot offers a standard 5x3 grid and 10 fixed paylines; it is medium to highly volatile and provides you with several features. You'll be seeing regular and Sticky Wilds, Scatters, and a Free Spins Bonus Round called The Craze of Cthulhu. Let’s see what all of these can offer in the new slot.

You will enter a dark, underwater world as you load Cthulhu real money slot, looking like an underground graveyard a bit, with seagrass moving around and little water bubbles appearing left and right. The reels are at the centre of the screen, while the control buttons are below them.

Starting with the leftmost, you first see the three-bar button, where the game’s rules are. Then, you see the Speaker button, where you can adjust the sounds of the game, followed by the Question Mark button, where you’ll locate the paytable. Inside, you’ll see the five high-paying adventurers, a Wizard, a Warrior, a Captain, a Female Assassin, and a medieval Fool. You’ll also see the regular Wild here, placed among the high-pays, as it gives you the same payout as the highest-paying Wizard adventurer, of 50x the stake for a 5-of-a-kind combo. Next, you’ll see the low-paying playing Diamonds and playing card suits, giving you up to 10x the stake for the top combo. The Scatter, of course, is Cthulhu itself, the evil-looking, orange-eyed creature.

Next, going right, you’ll see the Quickspin button, followed by the Balance display and the Win display. The Bet configuration field follows, where as you press the left and right arrow, you decrease or increase your bet from 0.20 to 20 credits. The Autoplay button is next, where you could put in play an infinite number of spins, followed by the big Spin button.

As you would assume, Cthulhu is an online slot that can be played cross-device. Whether you’d prefer playing it on your desktop device, or your smartphone/tablet, you can rest assured the slot will play flawlessly on any device.

Due to its HTML5 format, you won’t need to download it on your device to play it; you’d just need to join an online casino powered by Yggdrasil, which is compatible with mobile devices, load the slot and start playing it right away, no matter where you are.

The Wild is the main protagonist during the base game of the Cthulhu online slot. It is the symbol that gives you the same payout as the highest-paying Wizard symbol.

However, it is also the symbol that will help you form winning combos when lacking a symbol, as it works as a substitute for all symbols, bar the Scatter.

The Craze of Cthulhu is the Cthulhu bonus round where all the action happens. This is essentially the Free Spins round, so you’d need to land 3 Scatters to trigger the 10 Free Spins. During the bonus, adventurer symbols that land on the reels fight Cthulhu. If the adventurer wins, it turns into a Sticky Wild.

Should the Scatter appear on reels 1, 3, and 5 during the bonus round, it will retrigger additional 10 Free Spins. The retriggers are unlimited!

Cthulhu is a medium to highly volatile slot with a lower-than-average RTP of 95.42%. The max you could win playing it, as pointed out by the developer, is 1,000,000 credits.

This means that if you play it for the max bet of 20 credits, you could scoop a max payout of 40,020x the stake.

For a slot launched by Yggdrasil, it is no wonder Cthulhu has such a dark, quirky theme. But what surprises us the most is how uncomplicated the gameplay is, which is not usually the case with Yggdrasil slots. Cthulhu is all about Wilds, Free Spins with unlimited retriggers, and Sticky Wilds. It does come with a nice payout potential, considering how low the max bet is. Therefore, if you’re into slots of its kind, do give it a try. If looking for a more volatile game, make sure you try the developer’s Vikings Go Berzerk Reloaded or the progressive Gigarise Atlantis.

Do I need to download the Cthulhu online slot?

No, you do not. As an HTML5 slot, Cthulhu is playable across all devices without the need for downloading any software to load it.

Who created the slot Cthulhu?

Cthulhu is a product launched as part of the YG Masters program, created by Gluck Games, and released by Yggdrasil.

Are there any Cthulhu promo codes?

There should be promo codes available for Cthulhu since this is a new game, and operators often offer promo codes for brand-new releases. If you can’t find any, stay with us here at SlotSource.ie, and the minute we see some codes become available, we’ll share them with you immediately.

What is the max payout in the slot Cthulhu?

As Yggdrasil has pointed out, the max payout you could win playing the slot Cthulhu is 1,000,000 credits. Considering the max bet is only 20 credits, it means the slot can deliver a 40,020x the stake prize.

Yes, it does. The Free Spins round is called The Craze of Cthulhu, and you trigger it by landing 3 Scatters. You immediately receive 10 Free Spins.

Does the Scatter appear on all reels in the slot Cthulhu?

No. The Scatter symbol in the slot Cthulhu appears on reels 1, 3, and 5 only, and that’s why you only need 3 Scatters to trigger the Free Spins.

Does the slot Cthulhu offer a jackpot prize?

When was the Cthulhu online slot released?

Yggdrasil launched the slot Cthulhu on the 9th of December, 2021, and the slot immediately became available across all casinos in its network.

How many paylines does the slot Cthulhu offer?

What is the best casino to join and play Cthulhu at?

At SlotSource.ie, you have many Yggdrasil-powered online casinos to explore. All you have to do is check out our list with Yggdrasil casinos, find out what they have on offer by reading our thorough reviews, and in no time, you will find the right casino for you to join and play Cthulhu at.