Ancient mythology has long been a huge inspiration for slot studios. Egyptian, Greek or Norse deities have been appearing on slot reels for years. One of the best developers in the business, ... Read Full Review 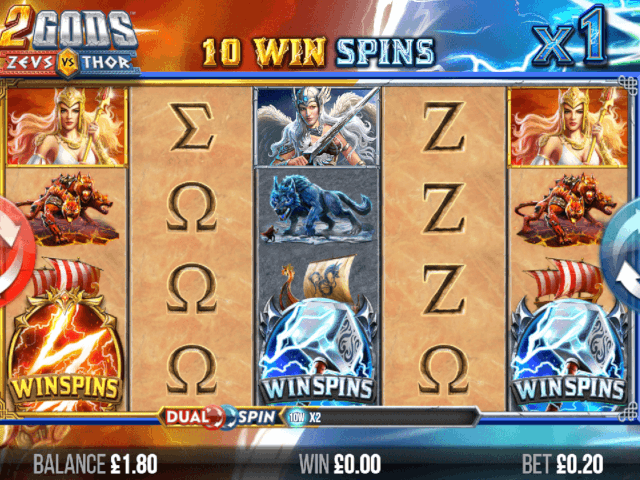 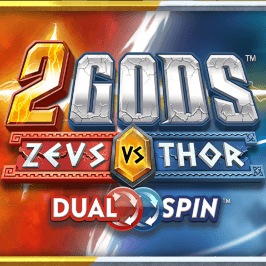 Ancient mythology has long been a huge inspiration for slot studios. Egyptian, Greek or Norse deities have been appearing on slot reels for years. One of the best developers in the business, Yggdrasil, has recently released a cool new slots game inspired by two of the biggest ancient gods of all time – Zeus and Thor.

Players at the best slot sites can enter the shoes of ancient gods and play for real money to unearth the wealth of the gods in Yggdrasil Gaming’s 2 Gods Zeus vs Thor online slot.

Yggdrasil’s ancient mythology slot game has five reels, but it uses a new mechanic that makes it so great. Instead of one spin button, you get two, each one corresponding to one of the gods. The red one sides with the Greek God of Thunder and the blue one sides with the Norse hero.

Across the five reels, you will see either blue or red symbols. A winning spin with matching coloured symbols doubles your wins. Unlike other Yggdrasil slot games, this one pays both ways – the Greek (red) symbols pay left to right; the Norse ways pay from right to left.

Each side comes with 1,024 different ways to win, bringing the maximum number of paylines to 2,024 – a nice number made more tempting when paired with the best slots bonuses available at Slotsource.

Yggdrasil’s games have always been oriented toward mobile devices – as is standard for online slots game providers now – and the 2 Gods Zeus vs Thor slot is no exception. You can spin it in different ways on your Android or iOS mobile phone or tablet with ease. No need to download it. The slot works perfectly on instant-play platforms, so even if you’re a beginner, you won’t have trouble to play it.

How to Play the 2 Gods Zeus vs Thor Slot

Playing the 2 Gods Zeus vs Thor video slot is very easy. Don’t be fooled by the two spin buttons – each one works in the same way. The only difference are the few different symbols. If you score a win that corresponds to the button’s colour, you get x2 on that line.

The dual nature of the slot’s gameplay means there are two different wilds and scatters. Five red (Zeus) wilds pay 10 times your stake and substitute for other symbols in a winning combination. Five Thor wilds do the same. The minimum bet is 0.10 credits and the maximum bet is 20.

Symbols in the 2 Gods Zeus vs Thor slot match each other – you get Hera on one side and a Valkyrie on the other. Fenris sits opposite of Cerberus. A Spartan-style helmet is matched by a Viking helmet on the other side. All symbols pay the same and wins double when they match the spin button colour.

The 2 Gods Zeus vs Thor slot comes packed with special features. Aside from the dual spin mechanic, the Dual Spins Wins Spins and increasing multiplier is the first bonus feature that real money slots players should know.

Triggered by three Wins Spins scatters (red or blue), you get 7-10 wins spins – basically free spins. The bonus round starts with an x1 multiplier. Before each spin, you must choose between the red Zeus or blue Thor. Guessing the colour correctly will boost the multiplier on top of the guaranteed wins, resulting in great winning potential.

Thanks to the progressive multiplier, the Wins Spins round is where you can hit massive, jackpot-sized wins.

The 2 Gods Zeus vs Thor online slot has an RTP of 96.5% which is over the industry average. It is, however, a high-volatility slot, so don’t expect wins on each spin. If you’re lucky during the free spins round, the progressive multiplier can help you hit over 15,000 times your stake. The maximum winning potential is 15,360 times your bet, or 307,200 credits at the maximum stake of 20.

Whose side are you on – Zeus or Thor? It doesn’t matter in the 2 Gods Zeus vs Thor slot machine – each one pays great. An ancient mythology slot with an exciting dual spin mechanic, 2 Gods Zeus vs Thor is a cool slots game with massive winning potential.

Spinning it for free is fun, but you can only hit the massive reward by spinning the thunderous reels for real money. Pick a side and engage in an epic battle between two gods of storms. If you’re lucky, you’ll reel in a thunderous win. Check out Slotsource for the top no deposit bonuses to get you started.